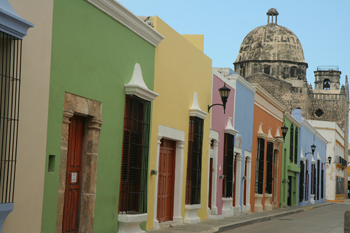 Campeche, the Yucatan Peninsula’s UNESCO world heritage city that is virtually unknown outside of Mexico, is one of the most beautiful cities I’ve ever visited. The historic center features narrow streets lined with meticulously preserved colonial buildings, surrounded by walls built to keep out invading pirates.

Every house is a different pastel color – none of the colors were repeated, and almost every house looks newly and beautifully restored. I’ve been in a lot of Spanish colonial cities with historically accurate renovated colonial buildings, but none of them are as pristine as Campeche.

The lack of information about these colonials of Campeche is astounding. Every guide book and travel site mentions the walls, forts and churches, but there is minimal information on the houses, other than to say they are pastel. Luckily, I met a very knowledgeable docent at the Museum at the Baluarte Santa Rosa who spoke great English and filled me in.

When I asked him how the city makes sure no two adjacent houses are painted the same color, he explained that the city tells occupants what color their house is to be painted. I wouldnt be thrilled if I had to paint my house orange, for example, but I guess it’s easily avoided by not looking at houses currently painted orange.

Coincidentally, I had just been in the historic district of Savannah, Georgia, where similar restrictions apply. In certain neighborhoods, if your door was green, it must always be painted green. The difference? The city of Campeche pays for your colonial home to be restored. They bring in artisans skilled in woodwork, ironwork and painting to bring the home back to it’s original state, paying millions of pesos in most cases. Sometimes, the interior as well as the facade is restored by the government.

When I commented how suprised I was by the number of houses for sale, he told me that people who want modern conveniences sell these colonials to move into newer, more spacious houses outside the walls. If you live in a colonial you have to forgo services like cable TV. DirecTV dishes in Mexico are bright red; in Campeche’s historic center, they have to be well hidden.

According to a master carpenter I know who lives in nearby Merida, that city will also restore the facade of your colonial home, but there are fewer restrictions in Merida. Merida is a mix of restored colonials, ruins of colonials and other buildings. Sometimes the facade of the ruin is so spectacularly restored you have no idea unless a shutter is broken that there is ruin behind it. In Campeche – all of the ruins have restored facades.

If I had a month, I would photography Campeche block by block, house by house.

For more information about Campeche, click here for the tourism board’s site.

Yucatan guides that include Campeche:

This article was originally posted January 11, 2012