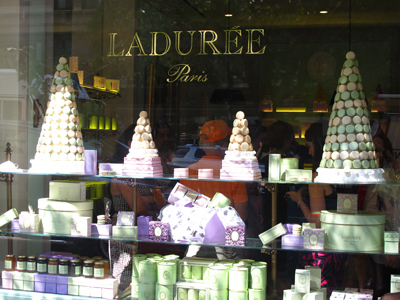 After I posted a (now missing) picture of the Laduree line on Facebook Wednesday night, a friend asked if this was the wait for tables. No, this is the line to get into the patisserie, where another lengthy, snaking line awaits. Once inside, figure an hour wait, depending on how many indecisive people are in front of you. There are no tables; it’s a relatively smaller store.

A famous Parisian/food blogger last week speculated that New Yorkers would balk at paying $2.70 for a macaron. Judging from the sales being rung up when I finally broke down and joined a somewhat shorter line on Friday at 11am, we’ve been vastly underestimated. One young woman was up to $237 when the credit card system went down – and she was still adding to her purchase as my portion of the line snaked away from her.

The line I was in was a very New York crowd, with a few obvious exceptions. A lot of people had never sampled Laduree’ before and couldn’t believe they could compare with Le Maison du Macaron or Bouchon Bakery. I wish I could have been there when they sampled their first Laduree’ macaron, even a day old, as they’re flown in from France.

There was a little grumbling over the lack of caramel fleur de sel (aka caramel au buerre sale’) macarons, especially as we could see unopened boxes we guessed contained them behind the counter.

There was also a lot of quiet confusion when the credit card system went down. I happened to be by the part of the line near the register, so asked the cashier if they had the old fashioned slide machine to run credit cards. She looked puzzled, and yet 10 minutes later a man came out of the back room with one. He then announced that they were having a problem and paying with cash would speed up the process. I was still 20-30 people from the front of the line, so figured it would be fixed by the time it was my turn. It was, and luckily, the man, who seemed to be the manager helped me.

Ever since it was announced in the NYC food press that Laduree’ was opening, I have been dreaming of something called a violette religieuse, one of the wonderful pastries Laduree’ sells in Paris. I’ve also been craving a passion fruit tart, another of the finest creations made by Laduree’. Thanks to a lot of aggravation at work, I have been taking brisk walks up Madison Avenue in the evenings, stalking the store since the planned opening day, August 22.

Unfortunately, there are no religieuse, not even a lemon tart. Just one of the world’s best macarons, plus candies, madeleines, and reportedly ice cream, although I didn’t see any. They also have several gorgeous displays of teas, jams and candies in beautiful classic Laduree’ packaging. The manager assures me the tea room will have the pastries I crave as soon as it opens next year. Judging from the success of this first US outpost, I predict they will push that opening, despite the economy.

Macarons are sold individually, or in boxes of 6,12 and a lot more. You have the option of the classic pink box, or a heavier, beautifully crafted gift box for an extra charge. Because the selection was so limited by the time I got to the front of the line, I ordered framboise (raspberry), violette-cassis, rose, lemon, green apple and cherry. As soon as my box was closed, the manager began opening the fresh macaron boxes behind the counter, and there were the caramel. He was wonderful about letting me trade a couple for them, since I had waited for so long. Actually, he was just a really nice, down to earth man; completely helpful and approachable like the rest of the staff seemed to be.

I could barely wait until I finished my picnic lunch in the Sheep Meadow to bite into my first caramel macaron since last October’s Paris trip. Not quite as oozy as a fresh macaron would be, but that extraordinary flavor was all there.

This article was originally posted September 3, 2011. The photos that accompanied the original post are missing.