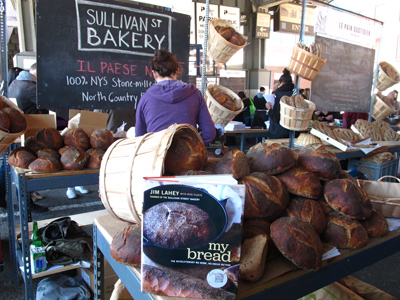 New Amsterdam’s 2012 market season started off with the breads of NYC as usual, but there was one unexpected exception – at least to me. The presence of Jim Lahey, my bread baking hero and guru.

His Sullivan Street Bakery is a fixture at the weekend market, and I began baking bread as a result. I’ve been getting regular emails about opening day, but really don’t recall any mention of this special addition. It really does show you never know what you might encounter in NYC.

Years ago, I ripped out the recipe for the no-knead steccas from the New York Times, then forgot about them until I had one at the market last year. They’re worth every penny, but at some point I remembered the recipe and since I’ve been cooking lately, figured I should try making them myself. I actually never tried to bake bread, but witnessed enough attempts from college housemates (including one who went on to become a well known pastry chef) to know it wasn’t easy.  Jim Lahey’s recipes make it easy, and from my first attempt, I have been making shockingly excellent bread.

Since I noticed a branch of his Sullivan Street Bakery is about to open in my neighborhood, I stopped at their booth to ask about the opening. The very helpful woman behind the counter told me it was scheduled for June 6, Jim’s birthday – and that he would be demonstrating pizza starting at 1pm today at the market.

After having my first Luke’s Lobster roll of the season (cholesterol test on Tuesday, be damned!) I was back to the pizza demo area by about 1:10pm – just in time to miss the first demo and samples.

Seconds later, Jim reached into the container holding the flour-dusted rounds of pizza dough and began to gently press the dough into pizza rounds, working around the dough, flattening it out as he went. When he stepped away, I asked a woman behind the table if it was OK to take pictures – she indicated it was and suggested video. I wish I had thought of that earlier.

Since so many people wanted to get up front to take pictures or video, I filmed the rest of the demo, but didn’t stick around for the next one. I waited until the end to get a shot of the finished product, but Jim put it on a far table, cut himself a slice – and that was it for that demo. By the way, I’ve had his pizza at his restaurant Co. – definitely worth adding to any NYC must-do restaurant list.

Luke’s Lobster Rolls, Porchetta and Newyorkina are some of the popular stands for sandwiches and ice pops. Several excellent coffee producers offer hot and cold drinks. Pasanella & Sons, across the street, is one of my favorite wine stores and they usually have tastings on market day.The New Amsterdam Market is held every Sunday through fall just north of the South Street Seaport, but despite the location it is not a touristy market. Food oriented visitors are welcome, but this is a real local’s market with food purveyors as well as items to be consumed while there.  People are shopping and sampling. There are some farm stands, but it is not a farmer’s market, like Union Square. There is usually a theme (next week is meat). Food enthusiasts can find excellent cheeses, mustards, chocolates, breads, jams, honey and other items from local producers. 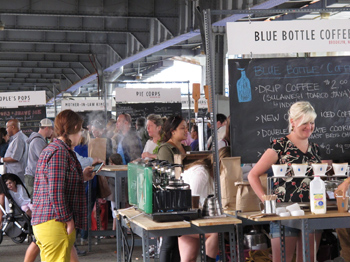 This is one of the reasons why I love NYC. I never know what I’m going to encounter here. Make sure to leave room for the unexpected when you travel.

Now – I’m off to make tamales with the fresh masa I unexpectedly found at the market!

My Pizza: The Easy No-Knead Way to Make Spectacular Pizza at Home[Hardcover]