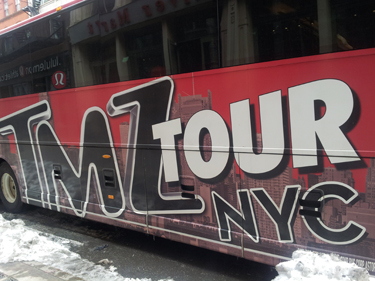 Visitors to NYC can wait to arrive to book many attractions, but not the popular TMZ tour. Every seat of the bus was full when I took the tour on a cold February weekend. One unlucky couple waited in the hope of no shows, but every guest arrived.

I had the benefit of taking a one hour version of the tour after Travel Massive, a worldwide travel industry networking event. Our abbreviated TMZ Tour, lead by Matt, a former Australian Idol competitor was so fun and engaging that I returned at a later date for the full tour. This time, the adorable, knowledgeable Ricky lead us around the city for the 2 hour tour that seemed to pass so quickly, I didn’t want it to end.

As usual, I arrived at the meeting spot early – and the bus was already there. Ricky  greeted each guest and efficiently checked their name on the list in his iPad. Every seat in the bus was full.

My seat mate was visiting from Atlanta. He spent the morning at the Cloisters with his sister’s AP Art History class and opted for the TMZ tour instead of an afternoon at the Met. Proving one can be equally interested in medieval art and where Beyonce lives.

We cruised downtown through Times Square past Parsons School of Design, Madison Square Garden, the Chelsea Mercantile building where Katie Holmes & Marc Jacobs live – not together. Ricky regaled us with insider info – or at least info I didn’t previously possess – about the famous and infamous. We saw the scene of many Lindsay Lohan crimes.

Video clips play on large screens positioned around the bus for easy viewing. The entire tour flows seamlessly with this combination of video and information from the live guide. The clips feature celeb incidents at the location the bus is passing at that moment.

This isn’t a static tour; it’s constantly updated to highlight current events and celebrity foibles. In the three weeks between my two tours, we lost Phillip Seymour Hoffman and the route and script were altered to show this.

We didn’t see any, but the guides do carry cameras in case any celebrities are spotted on the street. We got excited when 2 men exited Industria Superstudio, but we didn’t recognize them.

There are trivia games and prizes. I won a TMZ t-shirt for knowing it was Sting and his wife Trudie who, er, made a display in the windows of the Standard Hotel. Actually, Trudie referred to it as a bathroom at the Boom Boom Room, but I’m keeping the shirt.

We briefly stopped outside Chelsea Market and were treated to Eleni’s mini TMZ red velvet cupcakes. We made another stop in Soho so interested people could check out the Kardashian’s store, Dash.

Even our driver got involved when he spotted and alerted Ricky to a rare chrome Rolls Royce next to the bus.

If I have one problem with On Board’s TMZ tour – it’s that it’s too short. Memo to Georgette of On Location Tours and Harvey Levin: add an uptown loop!

Tour provided by On Location Tours.

This article was originally posted March 13, 2014.