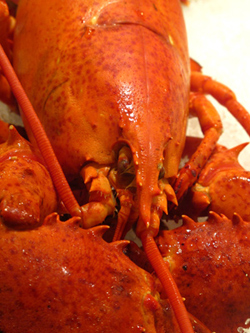 We lobster lovers have eaten these crustaceans in many locations around our planet. But nothing compares to the Maine lobster plucked from the sea in the morning and served that day. All over Maine, there are restaurants dedicated to serving lobsters. Many promote themselves as “The Best Lobstah in Maine.” On a recent trip we had the opportunity to visit several of these unique places and to truly sample their best.

Our first stop was in Freeport. The town has been revitalized by L.L. Bean, the purveyor of rugged outdoor clothing and gear to families for generations. L.L. Bean dominates the town with factories at one end and a variety of gigantic shops in the town center.

Our first restaurant was the Harrakeeset Lobster Pound. It is located a few minutes east of the town on a very pretty little harbor. In the quirky nature of these places, you order your food at different windows depending on what you want. You pay at the window. They give you a number and call it when your plate is ready. We had the Lobster Special which consisted of a 1.25 pound lobster, twelve steamed clams, and great corn on the cob. The corn had been steamed in its own husk. The entire meal was fantastic. We enjoyed these treats while overlooking the harbor.

The next morning we headed north to Boothbay Harbor. The town of Wiscasset is on the way and is well known for a little lobster shack on the river. It is called Red’s Eats. There were about twenty people on line so my wife found a table while I waited. I ordered lobster rolls, for which Red’s is famous. When I brought them to the table; I immediately discovered why everybody raves about them. The roll was toasted and lightly buttered. It was then filled with about 1.5 pounds of delicious lobster meat. Ah heaven!!!

That evening we went north through Damariscotta to New Harbor. A famous lobster restaurant, Shaw’s, sits on a wharf with a magnificent views of a small harbor. Once again we ordered our lobsters and sat outside waiting to be called. The ambiance was superb. Then the steamed lobsters came with lovely corn on the cob. What splendid decadence!!!!

After breakfast the next day we took a leisurely walk around Boothbay. We walked across the wooden bridge that connects the two sides of the harbor. When we got tired of walking we stopped for lunch in a little, local restaurant. McSeagull’s. My wife had an excellent haddock sandwich. I could not stop my lobster desires, so I ordered a lobster quesadilla. Wow!!! Loaded with lobster and very well seasoned. Another home run.

Dinner that night was at The Lobster Dock. This place is famous for its lobster and because it was featured on the Food Network program Throw Down. It was a crab cake challenge and Bobby Flay won. But, our food was wonderful. We had perfectly steamed lobsters while once again looking over a beautiful harbor.

The next day on the way to Camden to visit an old friend, we went onto the Penobscot Peninsula. This is really old Maine and very little has changed in these towns. Our destination was the little village of Blue Hill. It is filled with galleries and little restaurants.

We picked one for lunch that we had never visited called C-Shells. It is located right in the heart of the village. On the way in we passed the sidewalk tables and noticed a man eating a lobster roll. It looked substantial and we both ordered them. Wow! Again. These were even better than Red’s. They were so much larger and filled with perfectly cooked lobster. Their rolls were much larger in order to accommodate all of the meat. We wound up using knives and forks to enjoy the treat. These were the best lobster rolls that we have ever eaten. We were please to tell the owner of our appreciation of her food. She was thrilled and jumping up and down in happiness. We felt like doing the same while eating her food.

There are many TV programs and articles about the best thing I ever ate. On our “Lobster Trail in Maine” we found the best lobster that we have ever eaten. It was certainly worth the trip.

David is a world traveling retired dentist turned event planner, who searches out the best food wherever he goes. He’s also my father and travel mentor.

This article was originally posted July 5, 2011