Right now, a bunch of New Yorkers probably want to kill me…. I’m giving away some insider secrets to an off-the-beaten-track culinary mecca usually only visited by locals and a few in the know travelers. In fact, many Manhattan residents have never ventured to this place.

The good news is most hard core NYC-based gastronomes have been here done that years ago, and have moved on to Smorgasburg and newer pop-up food zones, and the lines have subsided. The mostly Mexican and Central American people who established and frequent this place were here before it ever hit the foodie radar – and they’re still here, generating enough business to insure the food is always fresh.

I’m talking about Red Hook, Brooklyn – primarily the Latin American food trucks around the Red Hook ball fields. The vendors originally set up stands to serve food to soccer players and fans on the weekends. As the word got out and 100s of people began lining up for each stand, the Department of Health (DOH) stepped in to regulate the vendors. Now, all food is sold from trucks with running water and refrigeration systems; regulated by the DOH.

This excursion involves the subway, a free boat, 2 boroughs, and a plethora of cheap, excellent food options. You will need to walk about 15-20 minutes in each direction to/from the ball fields – more if you intend to visit the main street in Red Hook before or after you eat. There are numerous side trips you can make on the Manhattan or Brooklyn sides of the river; plan accordingly.

You probably want to be at the food vendors for an early lunch (12-12:30pm). The later you go, the longer the lines. A little Spanish helps but is not necessary. There are shared picnic tables.

Take either the 2/3 or the 4/5 subway lines to the Wall Street Station. Head east to the Wall Street Pier; the opposite direction of the big brown (Trinity) church you can see when you exit the subway. If you want to explore the South Street Seaport before, you would take the above trains to Fulton Street instead, visit the Seaport, then walk south along the river until you get to the Wall Street pier.

Detour: Pier 17 at the Seaport is a good place to visit restrooms – and get great photos of the Brooklyn Bridge/East River from the upper outside deck. Resist the temptation of the food court.

Back to the Wall Street Pier. Look for signs for the Water Taxi to IKEA on the left side of the pier. The boats leave every 40 minutes and you can get the schedule here. The ride is about 15 minutes. The boat is free on the weekend, since it is assumed you will shop at IKEA. I always stop at IKEA before or after this itinerary. You can also make this trip on the weekdays as well, but the food vendors won’t be there; IKEA will reimburse your water taxi fare with purchase.

If the weather is good, get a seat on top. You get a great view of the lower Manhattan skyline, Governor’s Island, the Statue of Liberty in the distance, and Brooklyn.

Red Hook is a somewhat gritty, rapidly re-gentrifying Brooklyn neighborhood – know for it’s food, art scene, ironic hipsters and the Six Point Brewery. It has a completely different look and feel than the rest of the city.

Before the boat turns in to the IKEA dock, you will see a large warehouse with large windows and black shutters and some old train cars in front of the lower level. That’s Fairway Market – a large, well stocked grocery at the foot of Van Brunt Street, the main street in Red Hook that will be mentioned later. There was also water taxi service from there back to Manhattan – it is temporarily not operating, but check if your trip is a few months off.

When you land at IKEA, you have several choices. Visit IKEA, but know you will be carrying anything you buy. Or, head right to the ball fields, planning to visit IKEA to shop before departing. After shopping at IKEA, you can take the boat back to the Wall Street Pier, or a free bus to 2 different subway stops in other Brooklyn neighborhoods worth visiting (the Smith Street end of Red Hook or downtown Brooklyn).  You can also take a city bus to Park Slope, a quaint Brooklyn neighborhood with good shopping and a huge selection of reasonably priced restaurants/bars. Beware parents wielding strollers!

Getting to the Latino food at the Ball Fields

Grab one of the Red Hook brochures in the Lucite rack in the waiting area for the boat on the IKEA side; it includes a decent map but it shows the Food Vendors in the wrong place. They’re closer to Clinton Street than it appears on the map.

Or put “Clinton and Bay Streets, Red Hook, New York” in the search box at Google Maps. Zoom out a little so you can see IKEA in the lower left hand corner.

If you don’t have a map, either cut through the parking lot, or exit IKEA to the front of the building. You will be on Beard Street. Go right with IKEA on your right and the Red Hook Farm across the street. Continue to the end – the road will curve around and become Columbia Street. You will see a gated large park with baseball fields on your right. Continue on Columbia until you hit Bay Street. Turn right. You are walking around the gate of the baseball fields – they will still be on your right. You should see lots of picnic tables just inside the fence – and families eating. It’s maybe a 5-10 minute walk to the end of these fields. As you near the intersection at Clinton Street you should see the trucks and lines. The food trucks are on the corner of Bay and Clinton, extending down both streets.

The truck pictured here closest to the corner usually gets the longest lines. They are known for their huaraches, large oblong masa cakes topped with a thin layer of beans, your choice of meat or vegetarian options, plus shredded lettuce, cheese, salsa and crema. Hard to eat neatly unless you’ve mastered it from birth; I’m jealous of the Mexicans who eat them without spilling a drop. The sopes, tacos and anything else I’ve tried are fantastic. There are 2 trucks that sell pupusas – Salvadoran corn cakes filled with various meats, cheeses, or vegetable items, on the Bay Street side. The one with the blue sign gets ridiculously long lines, but not today. There is also an excellent truck with chile rellenos and other Guatemalan specialties, Antojitos Chapines, and a truck known for their ceviche. Closer to the corner are 2 juice/fruit trucks that also sell elote – corn. I’m addicted to their jugo de sandia – watermelon juice. Just like Mexico. 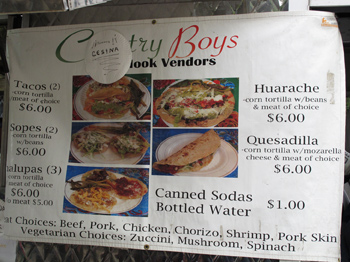 Other options in Red Hook

After you’ve had your fill, head back to IKEA to shop (or visit the restrooms, conveniently located at the top of the escalator), or take the boat or bus back to the best mass transit option for you. Or, continue on Beard Street past IKEA to Van Brunt Street, which is a couple blocks in the opposite direction of the ball fields. You will pass some gorgeous old brick warehouses on your left.

At the corner of Van Brunt, you can turn left to Fairway, a huge grocery store that is really an enormous gourmet store. Not known for the food, the cafe on the river has an excellent setting.

If you turn right on Van Brunt, there are several little restaurants worth visiting if the Latino food didn’t tempt you. The Good Fork, which is only open for dinner, gets packed and is known for their dumplings. Fort Defiance is a good place for brunch. Fans of Top Chef will want to stop at Baked, where Eric of Top Chef Desserts fame and others turn out fantastic baked goods. I’m partial to the salted caramel bar ($2.95; it would be at least 50% more in Manhattan). The Red Hook Lobster Pound is also a favorite. Food and drink at all of these places are a fraction of what they would cost in Manhattan.

Another place to visit is Six Point Craft Ales. Check here for information about the brewery.

For art lovers, there are numerous galleries and exhibits throughout the year indoors and out. The Kentler International Drawing Center is one of the most well know.

If you don’t want to backtrack to IKEA at this point, you can catch a bus in front of Baked that will take you to downtown Brooklyn, but it’s a good idea to have a map or feel comfortable asking people for directions to the subway if you don’t know your way around.

Whatever variation of the above itinerary you pick, a few hours in Red Hook is a simple, quick diversion from sightseeing in Manhattan, and easier on the wallet too. If you’re thinking there are too many banks, Starbucks and chain stores on every corner in Manhattan a trip to Brooklyn will show you a more real side of New York. It still exists…

This article was originally posted June 24, 2011