Drinking Champagne is certainly my idea of a perfect way to spend a major birthday and so I planned a day trip to Reims for the big day during my celebratory trip to Paris.

My French friend Antoine, whose birthday was a week away, joined me. He offered to drive, but for obvious reasons we decided to take the TGV train.

Although visiting small growers in the countryside would be ideal, we stuck to the houses with tasting rooms in Reims. We were slightly limited by the fact my birthday was on a Monday, the day many houses are closed. Ruinart and Mumm were available and I booked appointments for one in the morning and the other in the afternoon. It was easy to do this via email in English.

Also easy and can be done on their site in English. For tips, check out Paris by Train. Book 60 days in advance to get the lowest, PREMS fares, but keep in mind they are non-cancellable, non-refundable, and have steep fees for changes. With the time difference, east coast Americans can book at 6pm which is midnight in Paris, thus the next day. If you’re an American, make sure to click on “Great Britain” or you will be redirected to a 3rd party with higher prices.

Antoine and I ended up on separate trains to Reims and he suggested we meet at the cafe in the station. “There is always a cafe in the gare (station),” he informed me. He was right, and there he was, eating his pain raisin.

We got a map of the town and began the 15 minute walk to Ruinart. Reims is a very walkable city and there are beautiful buildings, Champagne houses and parks at every turn. Even in late October, the trees were green and the air was warm enough to walk comfortably.

Ruinart has the oldest Roman limestone quarries, or crayeres, in Reims and the tour begins with a 139 step descent. The quarries were spectacular and I wish my photography skills did them justice. Cavernous rooms that were dug with implements from above by ancient Romans. More impressive were the 1000s of bottles of vintage and NV Champagne in halls that seemed to extend forever. Magnum Alley, as they call the area where the magnums are stored, appeared to go on for a mile and was heaven for this Champagne enthusiast.

We learned about the Champagne production process from an extremely knowledgeable guide who spoke perfect, British-accented English. For some reason, the information about riddling – the systematic angling of the bottle, then removal of the yeast residue towards the end of the process – stuck with me most. Most of this is done by machine now, but magnums and larger bottles have to be riddled by hand. 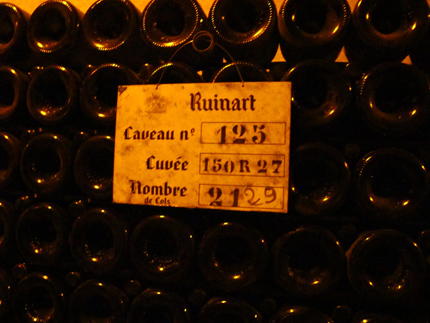 Another interesting area is the hall where every vintage ever produced is saved for current and future winemakers to taste and research as they develop new wines.

After the tour, we proceeded back up the 139 steps, which was a lot easier than it sounded when Ruinart warned me about the elevator renovation in the confirmation email. The woman in our small group with the Jimmy Choo 6″ stilettos also seemed to have no problem (very impressive!).

Following the tour was the highly anticipated cuvee tasting, where we sampled Ruinart Blanc de Blanc, Dom Ruinart and Dom Ruinart rose’. Everything we tasted was wonderful and being able to compare the wines enhanced our understanding of the production techniques and depth of quality.

We stopped in a great, lunch place on the way back into the center of Reims that featured salads from various regions from France. I’m still craving boudin blanc like the one served on my Perigord salad.

We arrived at Mumm just in time for our 2pm tour. Mumm is a larger operation and the group was slightly bigger. The tour was more formal, with graphics and models to display the process. At the end is the Museum, full of historical implements used to make, bottle and store Champagne. We had the Grand Cru tasting and were very impressed with the quality, selection and variety of their offerings.

Following the tasting, we had enough time to visit Reims Cathedral before the train. This major cathedral, where French kings were once crowned, is a major pilgrimage site for school children and lovers of history. Built to replace an older church ruined by fire, it was partially completed in 1299.

We checked out Champagne prices in the stores near the cathedral, but there were no bargains. Prices were similar to Paris.

When we got to the train station, Antoine realized that his ticket was so inexpensive because he had a several hour wait in Champagne-Ardennes instead of the 10 minute connection I had. Rather than wait for hours, he paid a 29 euro fee to change to a better connection, making my point about being careful when you book the PREMS fares.

The train ride back to Paris was painless and quick, making this an easy day trip, even when doing it at the tail end of a strike that had impacted mass transit for weeks.

If you would rather take a tour, there are many options. O Chateau is highly recommended.

This article was originally posted September 3, 2012.