A city as wine obsessed as NYC should have a winery. In fact, we have a few.

My wine enthusiast friend Amy and I visited Red Hook Winery on a cool November day to taste their selection of reserve wines and tour the operation. We were both so impressed with the selection that we had a hard time deciding what to buy at the end of our visit. Amy got the 2010 Clone 3 Merlot; I opted for the 2009 Cabernet Franc.

I had long been intending to visit the Red Hook Winery after tasting their Cabernet at NYC’s New Amsterdam Market, but life and Hurricane Sandy delayed my visit.

We visit Hometown BBQ for brisket sandwiches to fortify before the winery.  Not quite as smokey flavored as my brother’s brisket, which is modeled on Franklin’s in Austin, but pretty good! The line isn’t nearly as long as Franklin’s – but it can be long and slow while guests make decisions. Leave plenty of time if you want to stop here before walking to the winery for the 1pm tour. They offer meats by the pound, sandwiches, chicken and great looking side dishes. The sauces are tangy, not too sweet.

Hometown has a full bar and a very tempting selection of craft beers. If you want a faster lunch, Fairway has salads and other prepared foods at the exit by the train cars. If you have even more time, Van Brunt Street, the main drag in Red Hook has many options including The Good Fork and Baked.

On a windy or cold day, the short walk to the winery along the waterfront can be brisk, so dress accordingly.

Brief tours of the winery are given at about 1pm on Saturday or Sunday; otherwise tastings are pretty informal and are offered M-Sat 11-5 and Sunday noon-5.

We were greeted warmly by Sandra and Felipe and shown to the bar for the tasting.

The winery is converted from a cavernous brick warehouse – and features a comfortable seating area, the ubiquitous barrel-tables found in wineries everywhere – and a very homey environment. You can still see the white line that indicates the high level water mark from Hurricane Sandy, which put the winery out of commission for a few months – and almost completely destroyed their 2010 wines. When you visit the winery and see how it is positioned on the water, it becomes obvious how at risk low-lying areas truly are. This article isn’t about Sandy however, or how it almost destroyed Red Hook Winery’s 2010 vintage.

Red Hook Winery has sprung back to life and is producing over 20 wines with grapes from 15 New York State vineyards. Today, their wines are made by two winemakers with cult followings: Robert Foley and Abe Schoener. 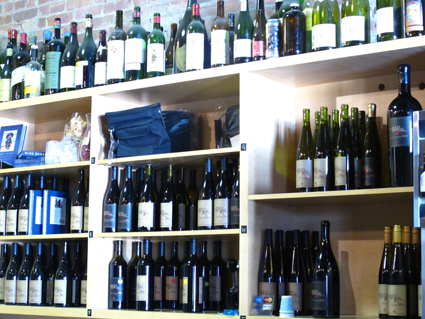 Felipe asks us a little about our wine preferences and pulls some bottles from the well stocked shelves behind the bar. We opt for the Reserve tasting of 6 wines. Felipe pours the Chardonnay as he tells us about the winery’s two very different winemakers, who he calls Bob and Abe (and so will I for simplicity’s sake).

Both are major figures in the wine world, but have completely different styles – and they don’t collaborate. Bob’s wines are lighter; Abe’s are more intense. Abe ages in barrels; Bob uses the steel tanks. Abe doesn’t use sulphur or yeast and has a philosophical approach to wine. Coincidentally, he’s a former philosophy professor.

Felipe characterizes Bob as a family man, and Abe as a man about town who can often be found visiting NYC’s hot restaurants. If any of this is wrong, it is not a reflection on Felipe – more my inability to listen, drink, take notes with one hand while swirling wine with the other.

The Chardonnay is slightly oaked with good minerality. I’m pretty sure this is a Bob wine. Next, Felipe asks if we’re adventurous, and pours Abe’s skin fermented Sauvignon Blanc. It isn’t filtered and very cloudy. We compare and contrast these two wines then move on to the reds.

The reds were all substantial and unique. We start with Bob’s nicely balanced Clone 3 Merlot. Then we moved on to his Twenty One Twenty Four 2010, which is a Sandy commemorative blend of wines named for the nautical time when the storm surge hit Red Hook. Finally we try Abe’s 2010 Thermidor, which tastes like it has a lot of Carignan to me. Carignan is my least favorite grape and I don’t love this wine – too bitter on the finish. Felipe points out this is typical of Abe’s style.

Finally we try Bob’s 2009 Cabernet Franc, which is my favorite in a group of very good wines. Very balanced, with depth of flavor and a great finish.

Felipe is very energetic, enthusiastic and knowledgeable about Red Hook’s wines and wine in general. He tells us his background is Argentinian and his father is in the wine industry.

After we finish and discuss all the wines, Felipe leads us and the group who was with Sandra to the wine making operation. First we see the machine that does all the bottling for the winery. 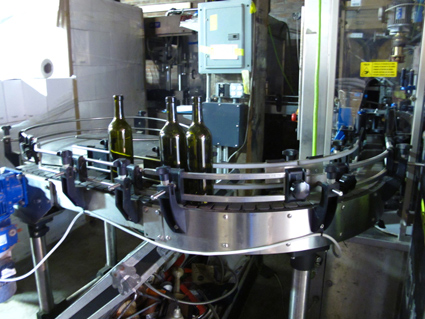 Then Felipe shows us how Bob and Abe store their wines for every step of the process. What is most unique is Abe’s system, which didn’t photograph well, but you will get the idea. Grapes, juice, stems all fermenting together in loosely covered barrels:

Getting to the Winery:

Traveling to the winery is easier than it sounds.

The subway stop closest to Red Hook, Smith 9th Street, is a long walk from the waterfront but there is an MTA bus that goes down Van Brunt Street. A better option is NY Water Taxi, which offers free service to IKEA on the weekend – and scheduled service for $5 each way on weekdays. On the way home, I always stop at IKEA for something, if only the gourmet shop to pick up a few items.

A (usually) updated link to the water taxi schedule is here.

If you have the option to get off the boat at Fairway (a large warehouse building with old train cars in front that is not a bright blue building with IKEA very visible on it), do so. This stop is closer to the winery.

From IKEA, walk along the left side of IKEA’s parking lot to the street (Beard Street). Make a left when you reach this street. After you pass Van Dyke Street and the Red Hook Crab Shack, you will see a sign on the left for the Red Hook winery. You cannot walk along the water from IKEA the entire way.

The winery is in the last door of the warehouse on Pier 41. You pass the offices of The O’Connell Organization, which happens to own most of the real estate on the waterfront – and has some great neighborhood info on their blog.

Our tastings at the Red Hook Winery were comped but the opinions are my own.