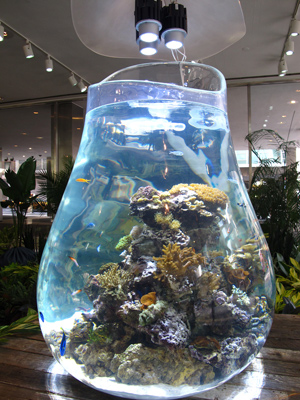 This very cool art installation has been stopping sidewalk traffic on Park Avenue since it was unveiled last week.

As an avid underwater photographer and snorkeler, I just had to get a closer look.

The free form glass salt-water aquarium is filled with exotic tropical fish including clownfish (Nemo!), anemones and live coral. Surrounded by a jungle of tropical vegetation, it will be a warming image, as winter and darkness set in. 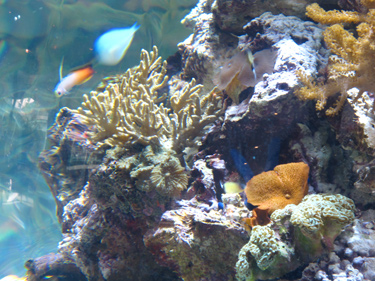 Land Mind is just one in a series of outstanding art exhibits showcased in the architectural showpiece that is Lever House. The 1952 Gordon Bunshaft building is an American landmark, the first ever curtain wall skyscraper, built according to the design principles of Ludwig Mies Van der Rohe – and should be on any visitor to NYC’s itinerary.

This article was originally posted November 6, 2011.