The Saturday morning crowd waiting for the Staten Island Ferry is composed of a huge concentration of people who are obviously visitors and I was pleased to see so many exploring our city beyond Manhattan. What did they know about Staten Island that I didn’t know, I wondered? Is there a major event? Or could a percentage of them be taking the Carreta Tour of Staten Island with me?

Silly me – these visitors were taking the free ferry to Staten Island and immediately taking the next boat back to Manhattan for photography and views of lower Manhattan from another vantage. It makes sense from a photography aspect, but next time they should consider detouring onto the island.

Instead of doing the mad dash onto the next boat, I toured the island for over 3 hours with delightful and very informative Georgia Trivizas of Carreta Tours. Georgia is such a wealth of information, I managed to soak up a lot, and quickly overcame my embarrassment about my own ignorance of NYC.

Georgia arrived early at the meeting place and showed me to Lighthouse Point, the new waterfront area to be developed. Gorgeous ruins of buildings that will hopefully be restored not demolished are on the route to a beautiful setting on the water that is about to be developed with the National Lighthouse Museum, retail, residential towers, restaurants and bars.

As we walk she tells me about her background. Daughter of a ship captain, she grew up on Staten Island and worked in the shipping industry for years. After 9/11 and the considerable national security issues; the impact drug trafficking had on shipping; and a new baby, Georgia launched Carreta Tours. Her goal is to share her borough with visitors, including New Yorkers ready to explore the most unknown borough of their city. She offers walking tours of St. George or uses her car or a van for small groups who want to see more of the island.

John Carrere lived on Staten Island and was involved in planning of St. George when they moved courts and civic buildings from Richmond Town, where they were originally located. Carrere and Hastings designed Staten Island’s Borough Hall, Courthouse and the main St. George NY Public Library. As we pass these massive buildings on the way to Georgia’s car, she points out that the spectacular WPA murals in Borough Hall can be viewed by the public Monday – Friday, 9am – 5pm.

She also points out where several great restaurants can be found in the opposite direction – by Bay Avenue and Hyatt Street.

We drove past the Saint George Theater, which can be visited when the box office is open. It’s one of those old, ornate theaters that rarely exist anymore. Then we pass the massive Curtis High School, a stately building designed by C. B. J. Snyder. A school superintendent sent to Europe to study architecture, he returned with the notion that the best way for students to learn was in an open, airy building.

St. Marks Place in St. George is a row of spectacular landmark buildings that was once a resort town in the 1840s and 50s. We slowly drive past, with Georgia stopping in strategic spots between the trees when possible for me to take pictures along the way. Then, we pass the back of the houses so I can see the expansive lawns and gardens – in the middle of NYC.

We pass by a huge farm stand and head towards Snug Harbor. I knew they had jazz events at this place, but I had no idea it was basically a prison for sailors, with Herman Melville’s brother as the governor, or warden. Now, it’s a cultural center with gardens, museums like the Noble Maritime Collection and more. The Chinese Gardens were beautiful even with little in bloom. Georgia suggests I return in 3 weeks to see the garden at its peak.

As we head towards Fort Wadsworth, which dates back to the Revolutionary War, we are so close to the Verrazano Bridge it feels like I can touch it from the window. We stop to view the fort below, then head to the house of Alice Austen. 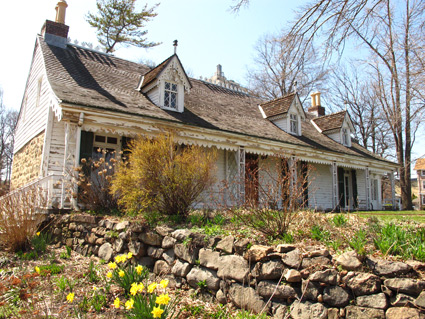 Alice Austen was one of America’s earliest female photographers and one of the most prolific, according to the information in her house. She produced over 8000 negatives, half of which still exist, and specialized in real NYC street life scenes and people.  Georgia tells me the house, which has an amazing view of the river and Verrazano, is covered in flowers in season.

Throughout the tour, Georgia continues to fill me in on interesting facts about Staten Island. For example, did you know Staten Island is the home to the largest Sri Lankan community outside of Sri Lanka? Or that Garibaldi and Olmstead lived on the island? Or that the garbage dumps have been gone since 2001? I’m embarrassed to say, I had no idea. She also fills me in on the latest controversial issue impacting the island, the Mt. Manresa project. Just the day before a judge had stopped demolition of the former Jesuit retreat that was sold for redevelopment. Since my visit apparently the situation has changed and it is possible that demolition is continuing.

Armed with more information about the borough I had only visited for funerals, I can’t wait to make return trips to Staten Island to see Old Richmond Town, events at Snug Harbor and take Georgia up on her offer to show me more. The island is crammed with things to do, whether you care about NYC history or not. Beaches, waterfront bars, noted restaurants, and parks are just some of the many options on the island.

On the ferry back to the Manhattan, I checked out the little Robbins Reef Lighthouse that Georgia mentioned was operated by Kate Walker, who lived there with her children and is now the namesake of a Coast Guard cutter. Then, I jockeyed for position with the visitors standing at the front of the boat to get shots of lower Manhattan.