Darryl Reilly’s 3 hour subway art tour showed me just how oblivious I have been in my city. New York subway stations feature art by both renowned and emerging artists – and I only noticed a fraction of it.

For one so observant above ground that I wrote about public art here, I must turn into a tunnel-visioned drone when I hit the subway.

After years of living in the neighborhood, I knew of the hats in the Flatiron/23rd Street N,R station – and the gorgeous mosaics in the Lincoln Center station, but I’ve walked by some pretty huge installations without noticing them, apparently for years.

In 1985 the Metropolitan Transit Authority’s Art for Transit program began commissioning works of art for subway stations about to undergo renovation. A portion of the improvement funds are allocated for artists to create permanent art installations that reflect the character of the neighborhood.

According to Darryl, bids are now being solicited for a new installation in a Brooklyn station. It will be exciting to watch the process.

We met at the Cosi restaurant on 51st and Broadway, a popular meeting sight for tour groups. A couple visiting from San Francisco completed our small group. Darryl’s lively and infectious enthusiasm for subway art was evident and we happily followed him into the 50th Street subway station.

This station is home to one of the program’s oldest pieces, Liliana Porter’s Alice: The Way Out featuring Alice and the Mad Hatter from 1994. Darryl explained the connection between the work and the neighborhood (theater). He introduced us to the name Miotto Mosaics; the fabricator of the majority of the installations. The installations are a true collaboration between the artist and the fabricator, who knows what works best in stations.

Next, we rode the train downtown one stop to Times Square. This station is full of notable art, including pieces by Jacob Lawrence and Roy Lichtenstein. Darryl pointed out these works, and the station’s two series called Times Square Times: 35 Times and The Revelers. The Revelers depicts unique views of New Years Eve celebrants, confetti and all.

For the next 3 hours, we followed Darryl on a combination walking, subway tour of the art of the underground. Leading tours in noisy, crowded subway stations is challenging – yet Darryl’s lively style of annunciating, careful planning, and ability to navigate a group through the crowds easily facilitated this tour. He lead us to specific cars to maximize our view of the mosaics as we arrived at the next station.

We walked the entire length of the 28th Street Station, with walls full of toys depicted in mosaic by Mark Hadjipateras called City Dwellers, so we could be positioned to arrive at the end of the next – 23rd Street Station. There, we checked out Keith Goddard’s Memories of 23rd Street, the aforementioned hats.

But, rather than an homage to the former shopping area known as the Ladies Mile as I always assumed, it turns out these are the hats of famous persons: entertainers, politicians, business leaders, philanthropists and the infamous. I never noticed the tiles with the names a few feet below each hat.

Darryl showed us an unofficial memorial to 9/11 victims I had never noticed in the Union Square Station. It is a mystery who placed them, but they have been allowed to remain and fade over the years.

After visiting the 8th Street station and Tim Snell’s Broadway Diary we headed to Prince Street to see Janet Zweig’s Carrying On. This piece showcases 194 figures created from photographs of New Yorkers. Made from water jet-cut steel, marble and slate, it depicts regular New Yorkers carrying on after 9/11 and the “notoriously opinionated and lively” New Yorkers who “really do carry on.” Source: janetzweig.com. 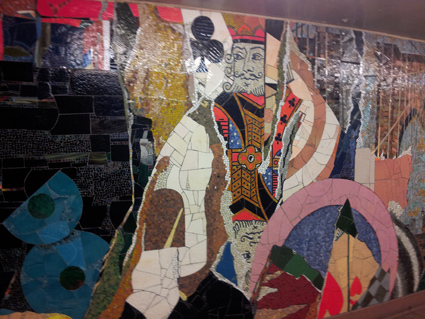 We made a quick trip to the DeKalb Avenue Station in Brooklyn, to view Stephen Johnson’s Dekalb Improvisation, one of my favorite pieces of the tour. This large installation features a King, the symbol of Brooklyn  – and a Queen, strategically positioned near the steps leading to the Manhattan and Queens-bound track.

On the way back to Manhattan, Darryl made sure we were ready to view the Masstransiscope artwork by Bill Brand in the now abandoned Myrtle Avenue Station. Click here for a YouTube video that is better than any of the photos I got from the train. Unfortunately the artwork was defaced when the video was shot.

We stopped at 14th Street for a thorough look at Life Underground, the work of Tom Otterness. I’ve walked by these pieces 100s of times, but never really saw them before this tour. Not sure how I missed this blatant display of political corruption and wealth disparity.

Before coming full circle back to the Revelers at Times Square, we made a stop at the 34th Street Station to check out Eric Fischl’s Garden of Circus Delights. This thought-provoking yet eerie collection is interestingly placed below Madison Square Garden, home of the circus – and Penn Station, which is always a zoo.

Darryl presented facts about the subway system in an interesting way, and is clearly knowledgeable about the art and artists in the stations visited. He was also focused on accuracy, which is appreciated. He said he read that the tiles in the Union Square station are original, but wouldn’t go so far as to state it.

The NY Subway Art tour is a fun yet informational way to explore some of the best art that city residents pass by daily without seeing. I highly recommend this tour to visitors and New Yorkers, as long as they are mobile and able to walk up and down stairs.