Boston’s Beacon Hill is one of the wealthiest neighborhoods in America; home to universities, exclusive men’s clubs, and people like John and Teresa Kerry. Beautiful townhouses with inventive window boxes on tree lined streets with steep, crooked brick sidewalks make up the bulk of the neighborhood. But, there is another more modest income side of the hill settled by Black Americans and later, Jewish immigrants. In addition to the plaque-marked residences of famous abolitionists on the Black Freedom Trail, the neighborhood is also the home of the Vilna Shul.

When a client cancelled our meeting, I found myself with several free hours on a Sunday afternooon in Boston. Having visited a lot of the major sites on a previous trip, I decided to spend more time exploring Beacon Hill. Toward the end of the Black Freedom Trail, I noticed the telltale Star of David peaking out from behind a fence.

Ina, the docent, who was sitting in front of the shul asked me if I wanted a tour after she noticed me pause in front of the building. Steve, who I later discovered is Steven Greenberg, the executive director, welcomed me warmly.

Ina explained that there is an exhibit on the ground floor and that the sanctuary was above. Before we entered the building, she showed me the outdoor stairway women would have climbed to reach the separate female section, which is typical of Orthodox Jewish synagogues.

Built in 1919, this was the religious center for the Vilner Congregation, which was founded in 1893 by immigrants from Lithuania. They met for years in congregants’ homes, but eventually purchased 3 tenements at 18 Phillips Street, which were demolished to build the synagogue. The Vilner Congregation held it’s last service in 1985 and the building languished under the threat of demolition until the court awarded the building to the Vilna Shul, Boston’s Center for Jewish Culture.

After many years of neglect, it was necessary to make the building habitable, by repairing the roof, rebuilding windows and skylights, and stabilizing the structure. As Ina described it, the whole building had been flooded and suffered water damage from leaks in the skylights.

During the process of painting, the original murals were discovered under the beige overcoat of paint. These murals are slowly being revealed as money to restore them becomes available. 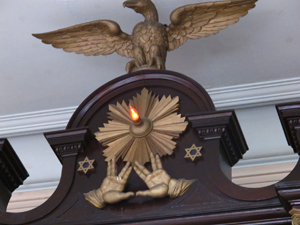 The wooden holy ark, which traditionally holds a synagogue’s Torah scrolls, is very ornate, New England classical Baroque style, which is incongruous with the understated sanctuary. On the top of the ark is an American Eagle. Below are 2 hands in the Kohanim style, adopted by Dr. Spock as the Vulcan’s “Live Long and Prosper” greeting. Leonard Nimoy of Star Trek, originates in the area. Coincidence? 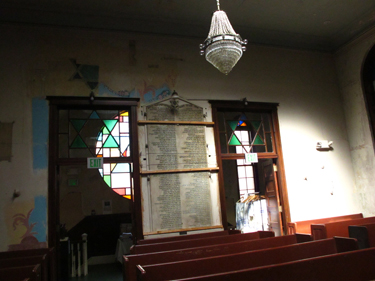 In the back of the men’s and women’s sections are engraved marble plaques listing the names of the members of the congregation. It didn’t occur to me until I started to write this that I should have checked for my last name. About 15 years ago my family was contacted by a man with the same name from Lithuania. Apparently there were several brothers; 1 went to New Jersey, 1 went to Boston and the others stayed in Vilna. Although I am the only person with my last name in the NYC phone book, there are several people with my unique name in Boston. Now, I wonder if my Boston relatives were congregants of the Vilna Shul, and if my great grandfather attended family events there.

The shul is now a center of Jewish life and culture for young families in Boston. Special services for about 200 people were held for Rosh Hashana. The exhibit on the lower floor focuses on the history of the Jewish people of Boston, and their patterns of migration to the suburbs.

Click here for great rates on Boston hotels on Booking.com

This article was originally posted on October 29, 2011.