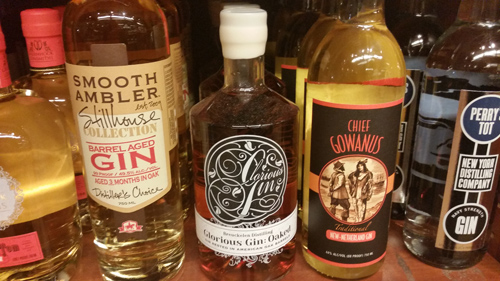 New York Travel Festival is one of the best travel shows in the NY area, and provides a wealth of information to new and experienced travelers, the exploding population of travel media; and access to ultra travelers for those in the industry. The 2015 show focused on serious topics like diversity in travel, developing your brand, and careers in travel.

The show also delved into one of the fastest growing industries and newer areas of tourism in New York City and State – craft cocktails and local distilleries.

NY Trav Fest kicked off with the inaugural walking of Urban Adventure’s New York Craft Cocktail Tour for members of the media and special guests. This Three-Happy Hour tour started at the Temperance Fountain in Tompkins Square Park. Who knew we had a Temperance Fountain? One of two remaining in NYC, these fountains were the effort of the Women’s Christian Temperance Union, an organization from Ohio dedicated to promoting the drinking of pure water over the devil’s drink.

Long a center for protests and alternative lifestyles, Tompkins Square also positioned us for a new type of NYC cocktail lounge, specializing in slow-made, artisanal cocktails.

Our knowledgeable guide Brian, and the team of observers from Urban Adventures started the tour with cupcakes from nearby Prohibition Bakery. Brian pointed out neighborhood landmarks as we made our way to three different bars in the neighborhood. The first William Barnacle Tavern, formerly Scheib’s Speakeasy, for absinthe.

Next we visit Mayahuel for their Randy, a mix of mescal and tequila made with their house-made ginger juice. Obviously, these liquors are not produced in NY as tequila and mescal are products of Mexico. The inventive cocktail goes down smoothly, and I am sure to return to this bar to try more of their mescals and unique salsas. Finally we stop at Wise Men for the Pulp Fiction. While our lovely bartender carefully makes the beautiful drink with Solbeso a liqueur made from cacao pulp, the overpowering Cynar makes it undrinkable to me. I’m not a fan of Amaro/Cynar, but those digestives are very hot in cocktails now.

Brian also brings us to the well stocked liquor department at the back of Astor Wines & Spirits. There, he points out the numerous brands made in New York City and upstate.

One of the more light yet informative sessions at New York Travel Fest focused on a booming industry in New York City and upstate. This new distillery movement in our state is creating jobs, a whole new tourism infrastructure – and some exciting new places to visit.

Distilleries used to be a huge business in New York State and the city, but Prohibition put an end to that. Prohibition forced smaller distilleries out of business – only the larger conglomerates could survive 13 years without sales. Recent changes to home/small producer brewing restrictions that created the craft beer movement, and trends that lead to the explosion of artisanal food products contributed to the growth of the craft distilleries.

According to the American Distilling Institute, craft spirits are the products of an independently owned distillery with maximum annual sales of 52,000 cases where the product is physically distilled and bottled on site.

In 2003, Tuthilltown, the first New York distillery since Prohibition opened in the Hudson Valley. In 2010, New York City got its first distillery when Kings County opened. Today there are over 600 craft distillers nationwide, one in every state. New York is currently #2 for craft distilleries after California.

According to Sam Filler, New York State saw an opportunity to connect the farm economy to manufacturing. They could assist farmers with sustainability by growing diverse products. From a tourism aspect, the distilleries also bring visitors, which has additional job creation benefits for the state. And, beyond the tourism infrastructure necessary to transport visitors safely to distilleries, there would be a huge need for local professionals to support the industry and business owners; accountants, lawyers, doctors, marketers and more.

Distillery related tourism is being studied now, but the numbers are pretty substantial. Beer and wine tourism already produces billions of dollars of revenue in the United States.

Currently Sam Filler’s team is developing a consumer facing site for Distillery Tourism in New York State. It will guide visitors on several virtual Distillery Trails around the state and in New York City. As Sam was speaking, I could envision the huge opportunity for entrepreneurs – developing day or weekend tours so these distilleries could be best enjoyed without driving. Small inns and spa treatments involving long soaks in vodka filled pools? I imagine David at Urban Oyster is already planning.

With high quality distilleries to visit in New York City, there isn’t an immediate need to travel upstate however. We have notable brands right in our five boroughs. Bridget Firtle, who claimed she grew up in a house that was former Speakeasy in Brooklyn, produces Owney’s rum in East Williamsburg.

The craft distillery movement differs slightly from the craft beer industry. Many craft beer producers started as a response to bad, mass-produced beers which has been exacerbated by consolidation in the beer industry. The liquor industry is completely different, with many high quality products available from small producers who remained independent, even if acquired. According to Bridget, “craft distillers offer traceability and transparency in the production process.” She also pointed out that the taxes are higher than other industries, thus the distilleries are making a substantial contribution to the economy.

Daric Schlesselman of Van Brunt presented a different viewpoint. According to him, all of the major bourbon brands are made by 13 distilleries and all taste the same as a result. His does not. He also pointed out that craft distillers can self-distribute. While it isn’t easy to do, it allows for more control because otherwise it’s hard to get distribution when two major distributors control the entire NYC market.

Van Brunt Stillhouse offers tours and a tasting room. Daric characterized the crowd as a mixture of locals, international visitors, craft distilling enthusiasts, and 21 year olds who want to have fun. A very diverse crowd. The distillery can be visited for tours and tastings Saturday and Sunday 1-5pm. Book online here to guarantee your spot.

Urban Oyster and Urban Adventures offer the Craft Cocktail tour, as well as other constantly evolving tours featuring a food or beverage component. Dedicated to promoting local businesses, the company offers a diverse line-up of tours that provide deep understanding for serious enthusiasts, or a good time for those who just want a fun tour.

One thought on “What’s New in NYC Travel? Distilleries and Craft Cocktails”